Making a Sprite move around the Screen

This is the first in a four part series to show you how to add some movement and action to your sprite. This first part will go over the basics of getting keyboard input from the player and using it to make the Sprite move around the screen.

We are going to be using the "Sprite" class we created in the tutorial "Creating a 2D Sprite". Instead of creating a new XNA Game project, you can just download the source for that project and begin working from that game project.

To start out, we are going to make some enhancements to the Sprite class. These enhancements were made in the "Advanced Scrolling a 2D Background" project, but we will go over them now.

To begin, start by adding the following objects to the top of the Sprite class.

The AssetName is a public object used to store the name of the image to be loaded from the Content Pipeline for this sprite. Size is a public object used to give the current size of the sprite after the scale has been applied. mScale is a private object that will tell the Draw method how much to shrink or enlarge the sprite from it's original size.

Next, we're going to add  a property to the class. Properties are often used when you have some other things to do when the value of an object changes. In our case, when the scale of the sprite is changed, we need to recalculate the Size of the sprite with that new scale applied.

Add the following property to the Sprite class.

We added the storing of the asset name and initial calculation of the Sprites size.

Our sprites need to be able to move, so we are going to add a new "Update" method to the class to help us do that. Add the following new Update method to the Sprite class.

Movement is a simple calculation of taking the direction the sprite should be moving in, the speed they should be moving and multiplying those by the time that has elapsed then adjusting the original position with that result.

theDirection is a Vector2 object. A value of -1 in the X value of the Vector2 will indicate something should be moving to the left. A value of 0 indicates it's not moving at all along the X axis. And a value of 1 indicates the sprite should be moving to the right. The same goes for the Y value of the Vector2. A -1 indicates the sprite needs to move up, 0 not moving in the Y direction and 1 means it's moving down. Combinations of X,Y values cause the sprite to move along both the X, Y axis.

theSpeed is how fast the sprite should move in a along a given axis. Value of 0 means it has no speed along that axis, higher speeds make the sprite move faster along the given axis.

theGameTime is used to keep how fast the sprite moves consistent across different computers. By always moving by how much time has elapsed, if a computer's refresh rate is faster, the sprite should still move the same speed as it does on a computer with a slower refresh rate.

With our sprite successfully changing position, now it's time to draw it to the screen in that new position and with it's potentially new scale. Modify the Draw method of the Sprite class to look like the following.

The SpriteBatch object has several different overrides for Draw (overrides are the same method, but they take additional parameters to give new functionality). In this case, we wanted to re-size the sprite up or down according to Scale so we're passing that in. We're using the defaults for all of the other parameters of that particular override. Eventually in the future we might use them, but for now, we just want to position and scale the sprite.

That's it for the changes to the Sprite class for now. Do a quick Build Build

now to make sure all the changes compile correctly. Nothing will be different in the game yet, but it's good to make sure you don't have any errors before you get to much further.

We're going to be moving a Wizard character around on the screen (you added the image for the Wizard to the project earlier). The Wizard is going to be a sprite, but he's going to have some additional functionality special to him as well. To do that, we're going to create a new class called "Wizard" and then inherit from the Sprite class. Inheriting gives you the functionality of the other class and allows you to add to that functionality. It's the basis of object oriented programming.

Right-click on the the game project in the Solution Explorer. Select, "Add", then pick "Class" from the add sub-men. This will open up the "Add New Item" dialog. Type in the name "Wizard" for your class and click the "Add" button.

These just help with the readability of our code so we don't have to type so much to get at the object provided to us by the XNA framework. For example, we can use Vector2 instead of having to type Microsoft.Xna.Framework.Vector2 every time we want to use that object.

It's is now time to indicate that we want to inherit from the Sprite class. Change the class declaration for the Wizard to look like the following.

The Wizard class now inherits from the Sprite class and has access to all of it's public and protected members and methods.

We're gong to be using some values in the class over and over again that do not change. So we're going to make these constants of our class. It's a good programming practice to get into the habit of removing "magic" numbers and strings from your code and moving them into variables and constants. A magic number or string is any number that is just magically in your code with no real explanation of what the value is or why it's that value.

Add the following constants to the top of the Wizard class.

Now let's add some more class level objects that will help give us the functionality we need to move our Wizard sprite around.

Add the following objects to the top of the Wizard class.

The State enum is used to store the current "State" of the sprite. What is state? You can think of state as any type of action you need to keep track of for you sprite because it might limit another action or "state". So if the sprite was dead, or powered up or jumping or ducking, etc. Those might all be "states" your Wizard could be in and you might want to check to see if the Wizard was in (or not in) a current state before you do something or draw something to the screen.

Currently, our Wizard only has one state, "Walking". mCurrentState is used to track the current state of the sprite and it's set to "Walking" when it's created.

mPreviousKeyboardState is used to store the previous state the Keyboard was in last time we checked. This is useful for times when we don't want to repeat an action unless a player has pressed a key on the keyboard again instead of just holding it down. With knowing the previous state of the keyboard we can verify the key was released before, but is now pressed and then do whatever action we need to do for that key.

Next, we call a method "UpdateMovement" passing in the current keyboard state. We haven't written this method yet, but we will shortly.

Then, we store the state of the keyboard in our mPreviousKeyboardState object. This will help us when we get to the point that we need to verify that a key wasn't released and then pressed again. We won't be using this functionality for this tutorial, but it's a good habit to get into to make sure it's available when checking keyboard input because you're bound to need that information eventually.

That's it for the Update method, but in it we called an "UpdateMovement" method that didn't exist. Let's go ahead and add that method now. This method will handle all of the checking to see if one of the movement keys was pressed and then setting the movement variables for the sprite).

Add the following "UpdateMovement" method to the Wizard class.

The UpdateMovement method is the key method of getting our Wizard sprite to move around. First it checks to make sure the Wizard is in a current state for Walking. Our Wizard can currently ONLY be in a Walking state, but there might be times in the future when we don't want to move him around if he's not currently in a Walking state so we check.

Now, when the base.Update of the Sprite class is called (which happens in our Update method already), the new values for our Wizard speed and direction will be passed and our Wizard sprite will move appropriately.

Do a quick Build

to make sure the Wizard class compiles correctly with no errors. You won't see the Wizard on the screen yet (if you're building this off the "Creating a 2D Sprite" project you should still just see the sprites drawn to the screen and you won't be able to move them. So we still have some final changes to make. We need to change the Game1.cs class to use our new Wizard class instead of the Sprite class.

We want to remove references to just using the Sprite class and instead use our Wizard class. So to do that we're going to be deleting some code and then adding some new code to replace it.

Delete the following lines of code from the top of the Game1.cs class

Now add the following line of code to the top of the Game1.cs class.

Now, modify the Initialize method, to look like the following.

This will create a new instance of our Wizard sprite (and we removed the old lines of code that were creating new instances of the Sprite class).

We now need to load the content of our Wizard. Modify the LoadContent method of the Game1.cs class to look like the following.

With our Wizard sprite content loaded, let's add in the ability for the Game1.cs class to "Update" the Wizard. Modify the Update method to look like the following.

Finally, we want to draw our Wizard. Modify the Draw method of the Game1.cs class to look like the following.

Now that we have appropriately modified the Game1.cs class to use our new Wizard class, do a Build

and see your results. The Wizard should now be drawn to the screen and you should be able to move him around with the Up, Down, Left and Right arrow keys. 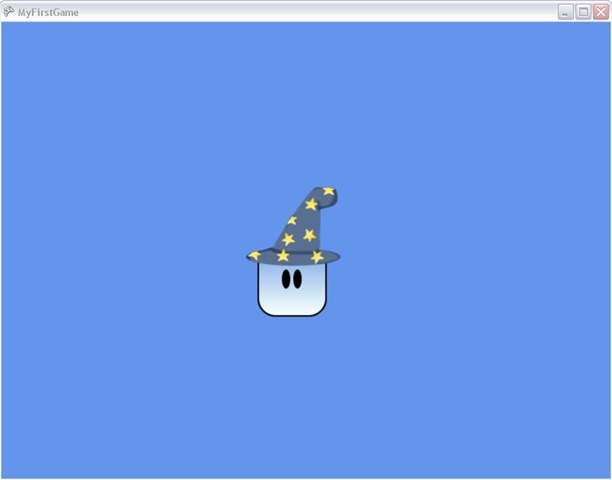 Congratulations! You have successfully figured out how to make a sprite move around the screen in you game. Can you think of some things you can change? Could you add the old Sprites back in and draw them to the screen? What do you think would happen if you tried to add two wizards to the game?

Play with it, experiment and ask questions. Most of all make sure you’re having fun!